Physician tenacity and an experimental drug save a life... 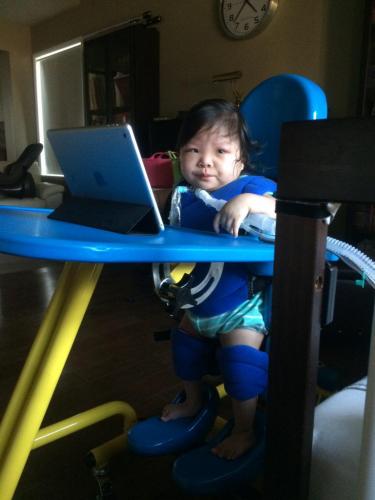 A toddler with a devastating rare condition has a chance for health, thanks to an experimental drug and the tenacity of a CHOC Children’s physician. Galya Chan, 2, is showing marked improvement after nearly nine months of regular infusions of cyclodextrin, a compound that has helped mice with Niemann Pick C disease, the condition also affecting Galya.

Dr. Raymond Wang, a CHOC metabolic disorders specialist, says Niemann Pick C affects one in every 150,000 people and causes cholesterol to accumulate in the brain, lungs, liver and spleen, leading to deterioration and early death. Even worse, there is no Food and Drug Administration-approved treatment for the condition.

After a premature birth, Galya developed an extremely enlarged liver and severe jaundice. A battery of tests led to a full exome sequence, which revealed Niemann Pick C – and no available treatment plan. “The diagnosis is horrible, but it’s better to know than to not know,” says Brian Chan, Galya’s father.

But Dr. Wang was aware of researchers studying the effects of cyclodextrin in animals with Niemann Pick C. The compound had shown to reduce cholesterol levels in their bodies, help animals survive without symptoms longer and have more overall longevity. “The problem is there’s no company that’s willing to get behind the treatment for humans,” Dr. Wang said. “There aren’t enough patients with this condition for companies to see the potential and profit for this. It comes down to individual physicians who want to make a difference.”

So, with Galya’s parents in agreement, Dr. Wang began the long process to seek special permission to treat the baby with cyclodextrin.

But the time and effort is paying off: markers of Galya’s cholesterol storage levels have dramatically decreased since she began treatment nearly nine months ago, data shows.

Before receiving the cyclodextrin, those markers were tremendously elevated, more than six times normal. Today, her storage levels have dropped more than 80 percent and now hover just above normal, with progress expected to continue. Also, Galya’s liver softened and its volume decreased by about 10 mL.

Moving forward, Dr. Wang and his colleagues will continue to study Galya to determine if the treatments are also healing her lungs, and it’s likely the cyclodextrin treatment will continue indefinitely – or until a different treatment is developed.

“Once we found out the diagnosis, it was sad,” says Brian, Galya’s father. “But now we can put our energy into helping Galya and working to find a cure.”